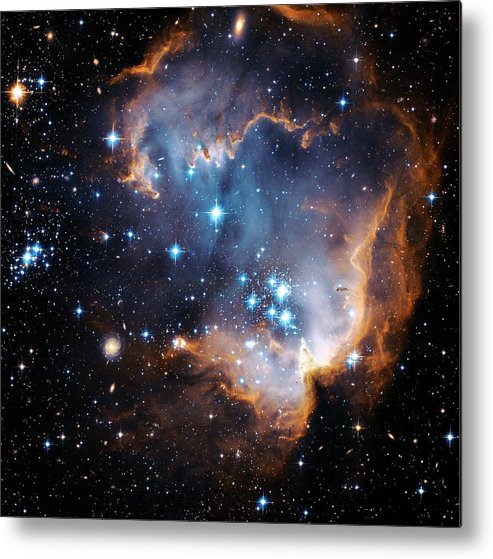 Starbirth Region Ngc 602 metal print by Hubble Heritage Teamnasaesastsciaura.   Bring your artwork to life with the stylish lines and added depth of a metal print. Your image gets printed directly onto a sheet of 1/16" thick aluminum. The aluminum sheet is offset from the wall by a 3/4" thick wooden frame which is attached to the back. The high gloss of the aluminum sheet complements the rich colors of any image to produce stunning results.

Starbirth region NGC 602, Hubble Space Telescope image. A cluster of bright, newly formed stars (blue) are blowing a cavity in the centre of a nebula... more

Wonderful photo! Congratulations on your sale!

Congratulations on your sale of this wonderful artwork! Fl

Congratulations on your sale today!!!

Wow! Congratulations on your sale!

Starbirth region NGC 602, Hubble Space Telescope image. A cluster of bright, newly formed stars (blue) are blowing a cavity in the centre of a nebula (gas and dust), which is glowing under the impact of the stellar radiation. This starbirth region is 196,000 light years from Earth, in the Small Magellanic Cloud, in the constellation Tucana. This image was obtained with Hubble's Advanced Camera for Surveys instrument. The results were published in January 2007.