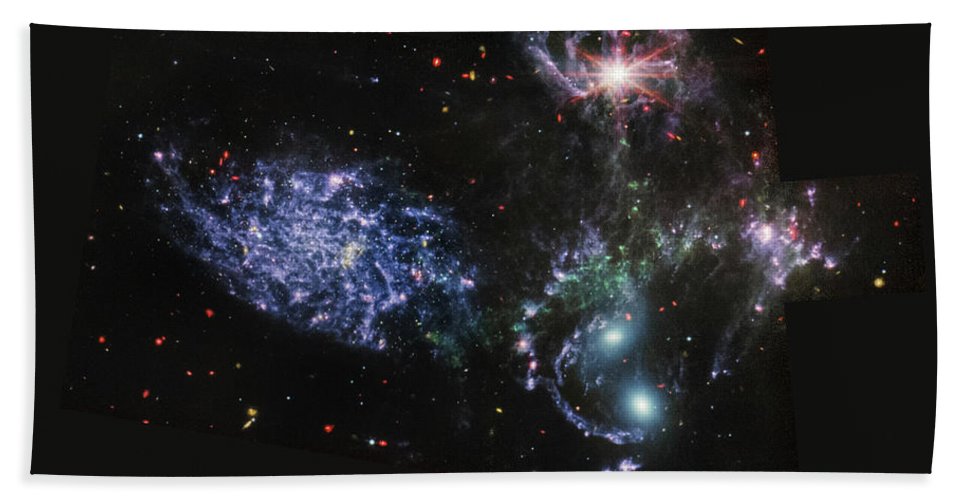 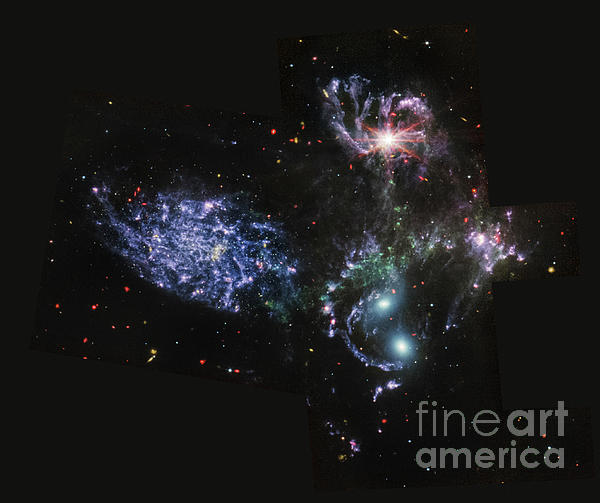 Boundary: Bleed area may not be visible.

Click and drag to re-position the image, if desired.

The watermark at the lower right corner of the image will not appear on the final product.

The image is near the edges of the product but doesn't cover the entire product.   Some of the background color may appear around the outside edges of the image.

Our luxuriously soft beach towels are made from brushed microfiber with a 100% cotton back for extra absorption.   The top of the towel has the image printed on it, and the back is white cotton.   Our beach towels are available in two different sizes: beach towel (32" x 64") and beach sheet (37" x 74").

Don't let the fancy name confuse you... a beach sheet is just a large beach towel.

James Webb Space Telescope (JWST) image of Stephan's Quintet galaxies (Hickson Compact Group 92). At left is NGC 7320, which is a foreground galaxy around 40 million light years distant in the constellation of Pegasus. The other galaxies are about 290 million light years away. They are: NGC 7319 (top), NGC 7317 (bottom), and two interacting galaxies (centre) NGC 7318A (lower) and NGC 7318B (upper). Gravitational interactions are causing trails of gas, dust and stars between the galaxies. NGC 7319 contains an active galactic nucleus, a supermassive black hole that is actively accreting material. The image covers an area 370,000 light years across. Image obtained by the Mid-Infrared Instrument (MIRI).

Science Photo Library (SPL) is the leading source of science images and footage. Sourced from scientific and medical experts, acclaimed photographers and renowned institutions, our content is unrivaled worldwide. Outstanding quality, accuracy and commitment to excellence are deeply embedded in our DNA. Science Photo Library inspires creative professionals and delivers engaging content of the highest quality for a wide range of clients in a variety of sectors. Visit sciencephoto.com for more information and stay connected on Twitter, LinkedIn, Instagram and Vimeo.