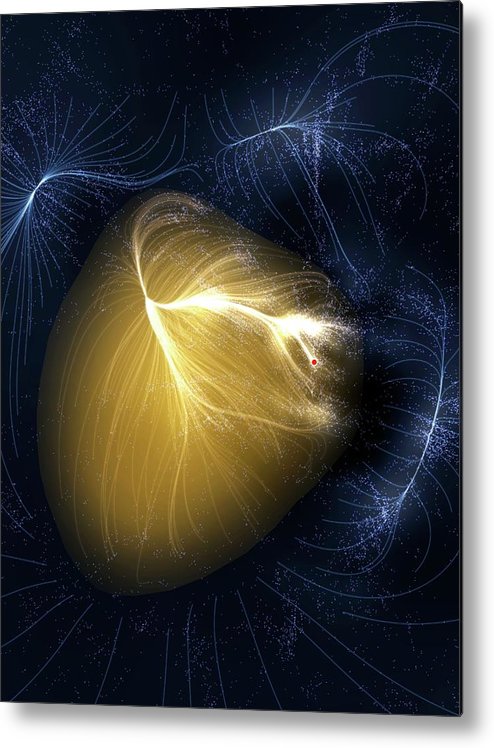 Artwork Of Laniakea Supercluster metal print by Mark Garlick.   Bring your artwork to life with the stylish lines and added depth of a metal print. Your image gets printed directly onto a sheet of 1/16" thick aluminum. The aluminum sheet is offset from the wall by a 3/4" thick wooden frame which is attached to the back. The high gloss of the aluminum sheet complements the rich colors of any image to produce stunning results.

Artwork of the supercluster, Laniakea (yellow), which includes our own Milky Way. Scientists at the University of Hawaii have examined the velocities... more

Congratulations on your sale, Mark!

Congrats on your Sale! Well done!

This is gorgeous, and of course the write-up makes it that much more impressive -

Congratulations on the sale!

Artwork of the supercluster, Laniakea (yellow), which includes our own Milky Way. Scientists at the University of Hawaii have examined the velocities of galaxies in unprecedented detail, showing in the process that Laniakea is much bigger than originally thought. It weighs in at 100 million billion solar masses and spans over 500 million light-years of extragalactic space. Each dot in this image is a galaxy - 100, 000 in all - each containing in turn millions to trillions of stars. The contour lines are velocity flows: they indicate the direction that galaxies are moving through the supercluster under the combined gravity of all of that matter. The red dot shows the location of the Milky Way, our own galaxy, on the edge of the supercluster