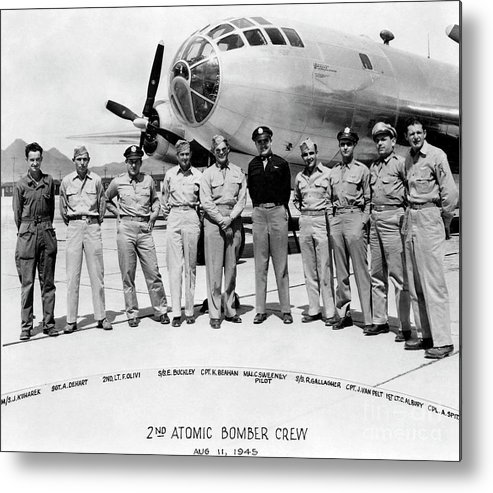 The watermark in the lower right corner of the image will not appear on the final print.

Second Atomic Bomb Mission metal print by Us Air Force/science Photo Library.   Bring your artwork to life with the stylish lines and added depth of a metal print. Your image gets printed directly onto a sheet of 1/16" thick aluminum. The aluminum sheet is offset from the wall by a 3/4" thick wooden frame which is attached to the back. The high gloss of the aluminum sheet complements the rich colors of any image to produce stunning results.

Second atomic bomb mission. Crew members of the US Boeing B-29 Bockscar bomber (in background) that was used to drop the Fat Man atomic bomb over... more

Second atomic bomb mission. Crew members of the US Boeing B-29 Bockscar bomber (in background) that was used to drop the Fat Man atomic bomb over Nagasaki, Japan, on 9th August 1945, during World War II. This was the second atomic bomb used in warfare, following the atomic bomb over Hiroshima on 6th August, three days earlier. Over 220,000 people died in both cities, and thousands were injured. Japan surrendered a few days later. The names of the crew are inscribed across bottom. The pilot and commander was Major Charles W. Sweeney (black jacket, centre). This photograph was taken at the crew's base in the Mariana Islands on 11th August 1945, two days after the mission. The nose art on the aircraft, painted for the mission, has been removed.

About Us Air Force/science Photo Library