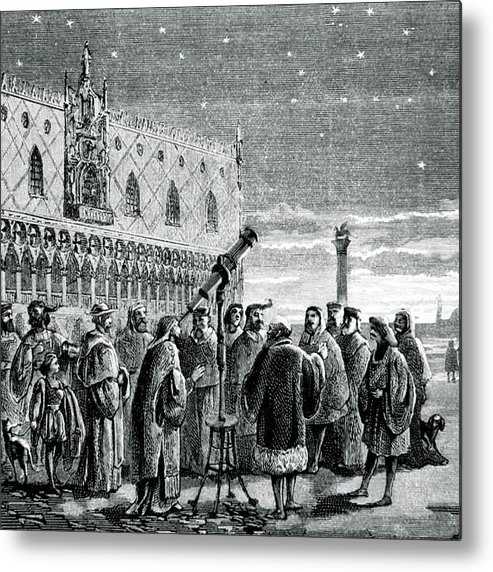 Galileo Demonstrating His Telescope In 1609 metal print by Science Photo Library.   Bring your artwork to life with the stylish lines and added depth of a metal print. Your image gets printed directly onto a sheet of 1/16" thick aluminum. The aluminum sheet is offset from the wall by a 3/4" thick wooden frame which is attached to the back. The high gloss of the aluminum sheet complements the rich colors of any image to produce stunning results.

Galileo's telescope. Engraving of Galileo Galilei (1564-1642) demonstrating his telescope, the first to be used for astronomical observations, to the... more

Galileo's telescope. Engraving of Galileo Galilei (1564-1642) demonstrating his telescope, the first to be used for astronomical observations, to the Doge (ruler) of Venice, Italy, in August 1609. Galileo (on the right of the telescope) heard of the first telescope or 'magic tube' invented by Lippershey in Holland in 1608 and built his own design in 1609. Using it he discovered a number of stars invisible to the naked eye, Jupiter's moons and mountains on the Moon. He published his results in Sidereus Nuncius (Starry Messenger, 1610). The Doge was more interested in its potential maritime and military uses. Scene set in St Mark's Square in Venice.