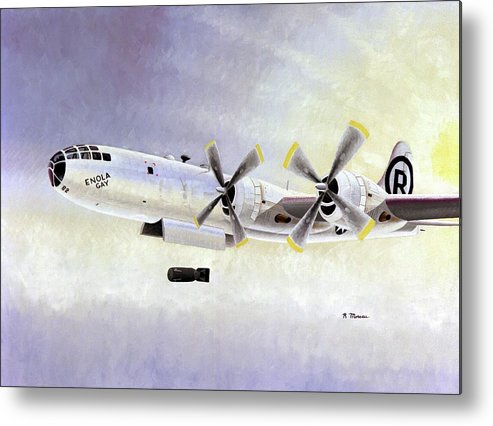 by Us Air Force

Boeing B-29 'enola Gay' metal print by Us Air Force.   Bring your artwork to life with the stylish lines and added depth of a metal print. Your image gets printed directly onto a sheet of 1/16" thick aluminum. The aluminum sheet is offset from the wall by a 3/4" thick wooden frame which is attached to the back. The high gloss of the aluminum sheet complements the rich colors of any image to produce stunning results.

Boeing B-29 'Enola Gay'. 1984 illustration of the Boeing B-20 'Enola Gay' dropping the 'Little Boy' bomb. This aircraft, piloted by Colonel Paul... more

Congratulations on your new sale

Boeing B-29 'Enola Gay'. 1984 illustration of the Boeing B-20 'Enola Gay' dropping the 'Little Boy' bomb. This aircraft, piloted by Colonel Paul Tibbets, dropped the 'Little Boy' bomb over the Japanese city of Hiroshima at 8.16am local time, on 6th August 1945. Detonating 565 metres above the city centre, the bomb had an explosive energy equivalent to 12.5 kilotons (12,500 tons) of TNT. It is estimated that over 155,000 people died in Hiroshima; this figure includes radiation- related deaths within the first year. This bomb, and a second dropped on the city of Nagasaki, resulted in the end of World War Two.

About Us Air Force